Hit the Tarpon early Friday morn but lost the only 2 hooked (and a Bigeye) then realized the the hook had no point probably due to an earlier snag, headed out to the north wall but there was already a half dozen boats there chasing small Tailor etc so headed up the northern channel but only found more Tailor.
Fished the tide change dodging boats in the "Y" for a couple a little Jewies then spent the arvo searching the northern channel from wavebreak to the Salmon bank but apart from more Tailor found nothing exciting.
Headed back to the Seaway on sunset and pulled a 60cm Tarpon on about the 3rd cast, that was enough and back at the ramp by 7.
P.S What a ripper day for the middle of winter. 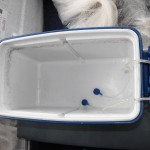 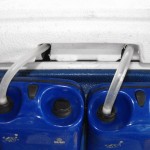 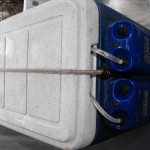 Did a couple of hours down Coombabah creek with a mate (Mick) specifically looking for whiting on surface lures, we only managed 3 whiting and a Bream all on 50mm River 2 Sea rovers, the fish were all small but a lot of fun none the less and certainly worth some further exploration, what was interesting was that both Mick and I missed massive strikes on the small lures, both failed to hook up and both of our 6lb traces had raspy rub marks so we're thinking GH or Tarpon so weather permitting we'll be back next weekend.

This also got me looking for a fix to see me through till then so I headed to another nearby spot the next morn with the 2kg mono bait gear and in 2 hours managed 1 66cm  GH with another lost, several Bream to a kilo and a very nice 50cm Sea Mullet which made me glad I left the 1kg gear at home, interesting that the Mullet was taken on a small cube of salted Tailor.

The gear is nothing fancy just a 20 year old rebound ugly stick, fairly cheap Pflueger Trion 4725 (which is closer to a 1000 size than 2500) and spooled with 2kg Platypus pretest. It still amazes me what you can get sitting on a grassy bank a short drive from home and no boat or expensive gear required, the hardest part is putting in the time and effort to find the spots. 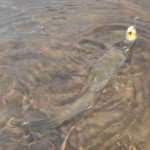 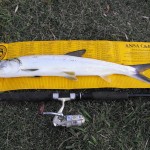 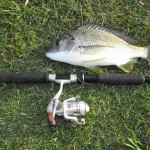 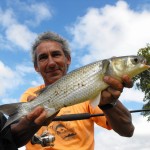