Suspended weed seems to have gone, small amount of weed on the bottom.  Lots of baitfish schools just offshore.

On the water at 2.30 am, this was a trip specifically to target tarpon.  Over the last few months I've put together a list of conditions that tarpon seem to prefer and this trip was to test one of these factors.  The tide was not ideal with it being the bottom half of the runout and weather conditions were.. challenging... with a strong northerly wind and occasional patches of rain.  However THE most important factor was evident(and at this point I'm not going to tell you what it is.. sorry maybe later), so I went ahead anyway.

Motored straight to spot 1, but there was nothing there, moved onto spot 2.. nothing there either, not looking good so far.  Both of those locations had yielded Tarpon in the past but they were not there this time.     I moved on to another location that I had thought might hold them and thankfully this time I was on the money.  First cast with a plastic and I was on to a leaping silver demon, a couple of jumps and some decent runs and I had him next to the boat, one more jump and he threw the hook. I moved around a bit over the next hour and found the tarpon were sitting in an area roughly 100 metres long by about 10 metres wide, the fish weren't bunched up like they usually are but were quite widespread. Because of this a few casts were required for each fish, but I still managed to land 7 Tarpon from 53cm up to 58cm and jumped off at least that many again. One fish in particular just would not stop jumping, he must have jumped at least 15 times but I still managed to land him, even in the boat he just would not stop moving.

At around 4.30am the fish switched off and I moved around the front of the walls looking for other fish, unfortunately it was the bottom of the tide and the water was very dirty. It wasn't until the tide started to run in that I pulled a few more fish, with 3 tailor and 2 small bigeye trevally falling to twisties.   Tried plastics on the bottom for a while but managed to drop the only 2 fish that I hooked. I investigated some bird activity offshore and found some large schools of baitfish but nothing feeding on them, won't be long before they enter the seaway in big numbers, might even happen during this next big southerly wind pattern. 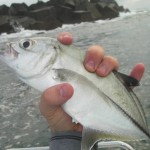 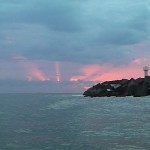 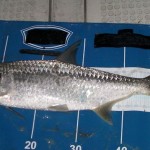 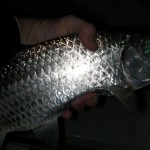