No Swell. Lots of phosphorescence at night, lots of floating weed around the north wall.  Lots of pilchard schools around.

On the water at 3am we headed to the seaway to see what was around.  Once getting there we found the phosphorescence level was once again very high, we persisted for an hour or so before giving up and heading to a spot further upriver away from the dreaded neon glow.  Once there we found a few active fish and quickly pulled a couple of 40ish tailor on Zipbaits poppers.  That was pretty much it though, we tried a number of other locations but all was quiet.  We moved into the seaway for dawn and headed up to the north wall.  Unfortunately the floating weed made it impossible to fish on the bottom with vibs or plastics as they fouled almost instantly.  We moved over to the south wall and on the first cast I got smashed on a Zipvib 90, a dogged fight had me thinking kingie but it turned out to be a 57cm bigeye trevally, my biggest one for the year so far.  There was plenty of bustups there for about 10 minutes before they went quiet but we hooked no more fish.  There were lots of birds flying around now so we investigated and found some acreage size schools of pilchards but nothing feeding on them.  We moved back to the north wall and proceeded to hook into some chopper size tailor on 20 gram twisties, we landed 4 before they too went quiet.  A random cast off to the side hooked another fish this time a 30cm luderick.  By this time it was 7am and decided to call it a day.. err morning.

Not a bad fish this time but early mornings are not producing the goods, so we may cut them out until it gets a bit warmer.  Quite a bit of surface action around today, more than I've seen for about 5 months in fact.  The volume of bait should mean good fishing in the weeks ahead, lets hope we get some decent waves to go with it.  Due to the volume of weed, looks like the north wall would fish better in the second half of the runin, first half of the runout. 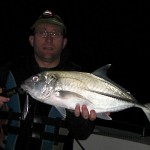 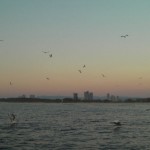 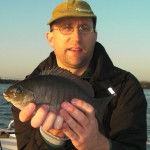 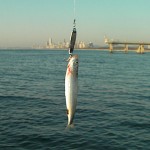 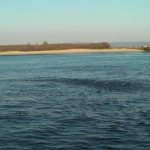