Today I wanted to spend some time looking at some new locations so I got on the water a bit earlier than usual and moved to spot 1.  As soon as I got there I saw a couple of active fish so I picked the biggest one and cast to it with a ZBL popper.  Even though it was a bad cast and fell about 5 metres short, he was onto it after the first pop and he smashed it hard.  It was a dogged fight close to structure which had me thinking jack, but it turned out to be a 53cm Tailor, pretty good fish for the first cast.  Next fish I cast at looked smaller and he had quite a few goes at it but he did not hookup.   I persisted for a little while with a few other lures but caught nothing else, there was a bit of phosphorescence in the water but it wasn't too bad.  I moved onto spot 2, this location had lots of small tailor feeding on the surface and they were quite happy to hit the popper but hookups were rare, I did land 2 more tailor around the 40cm mark.

By this time it was the top of the tide and I moved into the seaway to scout some locations during the runout tide.   The phosphorescence levels in the seaway were insane, my line was clearly visible at all times, almost like a vivid neon arrow saying  'This fish has strings attached so dont eat it'  I persisted anyway.  I tried a number of techniques and found some great fish holding locations with plenty of fish on the sounder but nothing was interested in my vivid neon lightshow.

Dawn arrived and I switched to poppers and soon caught one bigeye around 35cm, had a few more hits which didn't hookup.  Not much else around so I moved offshore and had a look at a couple of  inshore locations. First up was the narrowneck arti, but there was nothing there. I moved on to the scottish prince.  There were tons of fish on the sounder there but all I could tempt was one small tailor.  By this time it was  7am and I had run out of time so I called it a day.  One of my worst trips for a while but with a small tide and high phosphorescence levels its not really surprising.   Was a nice day out there though. 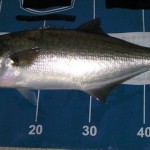 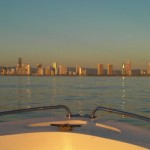