Decent tidal flow, and strongish SW winds made it hard to fish the end of the north wall.  Lots of boats in the seaway and broadwater, would have caught more but the volume of boats made it difficult.  Lots of surface feeding activity.

Once we launched at 2.30am we headed into the seaway to check out some locations, the volume of boats in there was extremely high as well as land based fishers on both walls, so we changed our plan and headed up to Sovereign Island.  Once there we found some surface feeding tailor and using Zipbaits ZBL poppers we landed 12 tailor from 35 -45cm.  I have been testing these poppers for a short time and they seem to work extremely well on low light surface feeding fish, particularly in the natural prawn patterns.  They went off the bite after an hour or so so I tried a few new lures such as minnows, vibs and plastics but could not get another hit.  By this time dawn was upon us so we moved back to the seaway and thankfully the landbased fisherman were gone allowing us to have a quick go at fishing for Tarpon.  Using ecogear Grass Minnow M in midnight Glow I managed to hook 1 fish of 61cm which took about 10 minutes to land.  I was testing some new jigheads, 5/8thoz with a size 2/0 hook, and this seemed to be an ideal match for tarpon as it stayed connected despite several large jumps and lots of thrashing on the surface, more testing is needed though.  By the time this fish was landed the tarpon had left so we tried jigging vibs for a little while before moving around to the The Flats.  Here we found a school of 30-35cm bigeye trevally occasionally hitting the surface so after pulling a couple on 20gram twisties we changed to ZBL poppers once more.  These proved to be very popular with the trevally and enabled us to cast right into the rocks.  We landed about 10 more on poppers before they moved into deeper water.  By this time the sun was up and the boat traffic was horrendous so we decided to call it a day. 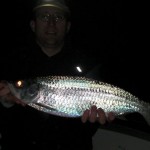 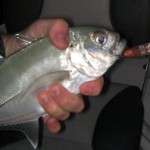 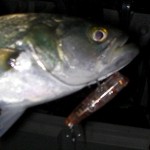